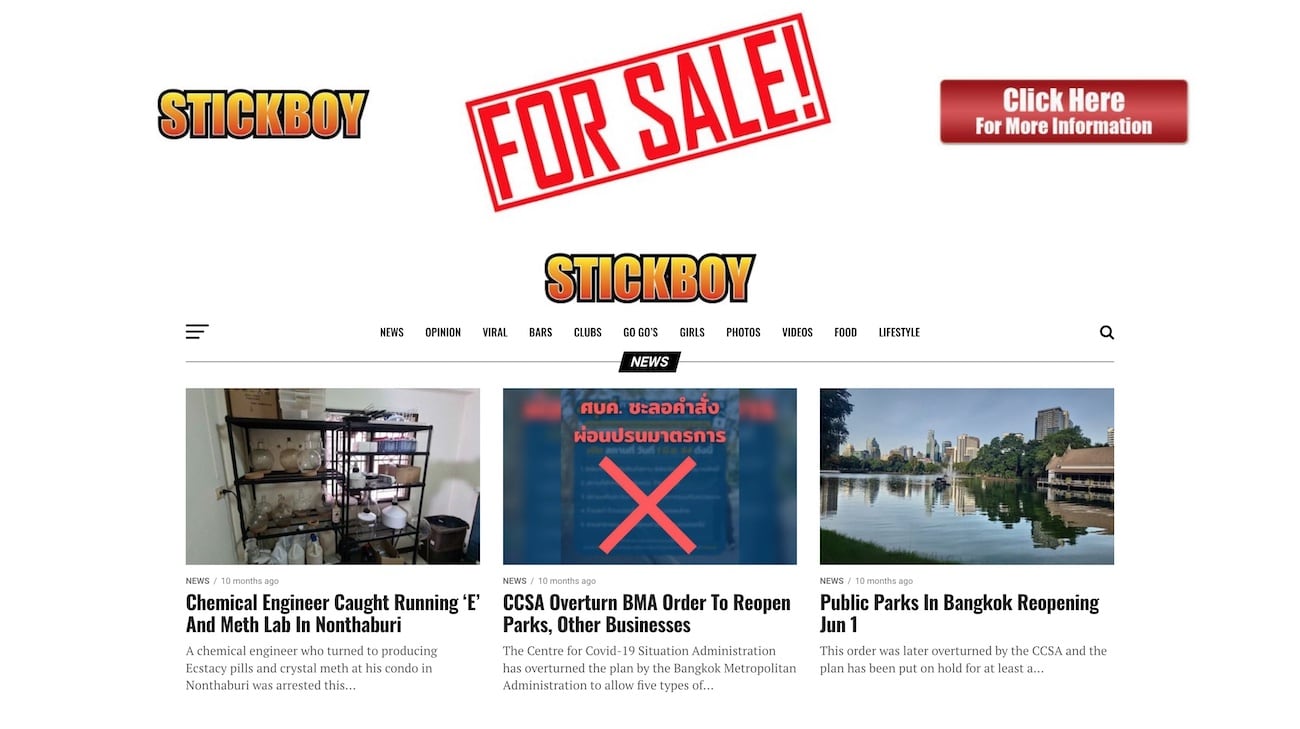 After commenting on life in Bangkok and Thailand for over 8 years, Stickboy Bangkok has hung up the gloves and call it a day.

We know COVID has not made it easy to bring interesting and funny stories about Bangkok nightlife and life in Thailand, and Stickboy has certainly suffered from it.

His website is no longer updated, it even welcomes you with a huge “for sale” banner. His social media has gone dark, and he even left Thailand.

But does that mean Bangkok nightlife is dead?

For the few of you who are not familiar with Stickboy’s website and never followed his hectic Facebook and Twitter feed, let’s explain what you’ve been missing.

In his own words:

Like the little brother of Stickman Bangkok [/stickman-bangkok]Stickboy covered Bangkok’s nightlife and bar scene in detail, with stories and reports on bars and clubs, gogo bars, and updates on the best places and deals to get hammered in the city of Angels.

But unlike Stickman, Stickboy also shared a lot of viral content from all corners of the Thai web.

For many of us, it was the feed that made us laugh and reminded us why this country is in a league of its own.

From the usual Thai pointing fingers to giant creatures crawling out of toilets, Stickboy posted up to 20 posts per day of the most viral videos and photos in the country.

Stickboy also had a thing for Thai girls (much like us) and was constantly sharing with us the hottest Thai girls from all angles.

Thai bar girls, net idols, escorts, they all had their minute of fame on Stickboy’s website or social media feed.

The site was as famous for its viral content as it was for its photo gallery of Thai bikini babes, busty Thai girls and more.

You can still see the photos on his website, but there will not be any new one from now on.

From what we read in his various interviews, Mike had been traveling to Thailand regularly since 2005 and eventually moved in April 2014 and founded Stickboy Bangkok just a few months later.

He already had experience in website management and online marketing, so his passion for Bangkok nightlife slowly led him to start Stickboy when he settled in Thailand.

Mike also ran a digital media agency in Thailand called Stick Media Co Ltd, which owned Stickboybkk.com and other websites in the same niche, including the veteran stickmanbangkok.com.

If you want to see what Mike is up to now, go follow his banter on Twitter:

For now, Stickboy is gone, but who knows, maybe it will make a comeback, just like the infamous Stickman did back in 2015.

But it does not mean that Bangkok nightlife is dead. It did suffer a major blow with COVID, but we know it’ll come back stronger and wilder.

That means there are a lot of interesting things to cover.

At Bangkok Nightlife we ​​have many guides on the best nightlife in the city, the best bars, restaurants, hotels, and much more.

We also cover many topics about pretty Thai girls, dating in Thailand, and the best places to pick up girls in Bangkok.

If you liked Stickboy Bangkok, you’ll also like what we offer.